How Uganda came to be called ”Uganda”?

1/7 Even before we get entangled into the weeds of street names, names of schools and names of large slums, the fact is, that of all colonially imposed names, the most inappropriate and rather silly is “Uganda”, the name of our country.
2/7 As you know, on all their journeys to the interior of East Africa, colonialists went around with Swahilli speaking askaris and translators.  Unlike the Bantu languages, Swahilli lacks the “B..” noun class.  In the Ugandan Bantu dialects, the names of the territories occupied by key ethnic groups are prefixed with “Bu”, hence, Bunyoro the home of Banyoro, Buganda that of Baganda; Bukonzo, Bugisu, Budama, etc. 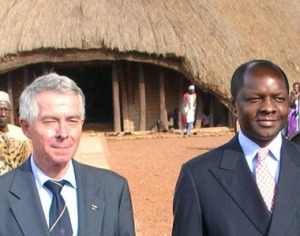 3/7 For all those names, the Swahilli drop the B, and refer to place names as Unyoro, Ugisu, Ukonzo and…Uganda.  For the people inhabiting those place, the “Bu” prefix is shaved off completely…leaving you with Unyoro, the home of the Nyoro; Ukonzo the home of the Konzo, Uganda (Buganda) the home of the Ganda (Baganda).  For other places, you will hear of Ungeleza, Umarekani, Uchina, Urengo (Portugal).  If the Swahilli decide to use any prefix on the people, they will employ “Wa-“.
4/7 You also know that, originally, the interest of the British in the place now daftly called “Uganda” was to have Buganda (Uganda in Swahilli) as the protectorate or colony, not other adjoining areas.  Hence, you will hear of the 9th June 1894 dispatch from the Earl of Kimberley (British Foreign Office) to the Consul General of East Africa (Arthur Hardinge) regarding the formation of the ‘Uganda’ (meaning Buganda) protectorate: “This protectorate ( Uganda ) will extend only over the territory which is included in Uganda proper (i.e., Buganda ), bounded by Koki, Ankoli (sic) and Usoga (sic)..”. You may also have heard about Commissioner Hesketh Bell’s policy slogan: My policy is going to be ‘Uganda for the Baganda”
5/7 So, even after they changed their mind and went in for a larger territory, they maintained the name of the staging post…Uganda (or Buganda).  Even when the country has come to embrace Acholi, Lango, Banyoro, Banyankore (of Nkore..not “Ankole”), it is still called “Uganda” Swahilli for Buganda.  Very silly indeed!
6/7 We are so enslaved that, because the British mispronounced the Swahilli word, we also adopted the same silly mispronounciation: “Yuganda” (as in Yugoslavia)..where a word starts with letter U, in English it (mis)pronounced as Yu.  For countries like Uruguay, they were already firmly established that the name of the country could not be distorted.
7/7 If we are to castigate the inappropriateness of names, we have  to start with “Uganda”, the mispronounced misnomer….and by the way, if the colonialists had invaded through Bukonzo, or Bushenyi, or Bugisu, would we have been happy for the country to be called Ukonzo or Ushenyi, Or Ugisu? If not, then, why “Uganda”, the land of the Ganda?  Are Acholis, Banyoro, Bamba…all those…are they Ganda to belong to the land of the Ganda, or Buganda or Uganda in Swahilli?
Lance Corporal (Rtd) Otto Patrick