Dear Ugandans,
Are we here talking about the picture that appeared in the Monitor edition of 11th May 1999?
I mean this one:

Anyway, just a few points.  One, a close examination of the camouflage pattern of the uniform donned by those individuals molesting that lady revealed that they were Zimbabwean service personnel.  The actual pattern was like the one you see below worn by a Zimbabwean soldier.  If you look at the right sleeve of the soldier in the picture above, and the right sleeve of the one below, you will know see what I mean: 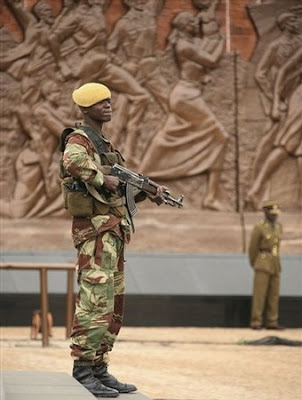 Zimbabweans use pattern No. 0072, also called “Lizard Pattern” whose sample you see below.  That is what the offending soldiers above were donning:

Congo UPDF used three main types of uniform.  The pattern you see below:

The top three were being imported from China.  In fact the Wafulas made quite a bit of noise about the third one as part of the “Ill-fitting-Uniform”Scandal.

The olive green below was the commonest and it was being made by Nytil.

Secondly, a closer examination of the camouflage pattern of the attire donned by the lady in the Monitor picture demonstrated that she could never possibly have been Candida Lakony whose camouflage was as dark as you see below:

‹ Older Post Education system in Uganda is dividing Ugandans
› Newer Post As Besigye’s wife was being decorated with heroes medal,Besigye was being beaten by the police