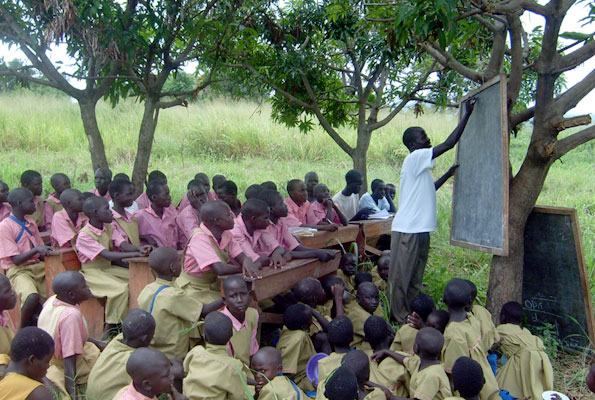 Summary: The education system in Uganda today is deliberately used as tool by the powers that be, to divide Ugandans, from the cradle (to the grave), for selfish reasons/designs known to them. To them, this is the best way to ‘end’ “Project Uganda”. For example, while it was possible, under the abominable colonialists, for an Acholi boy to enter King’s College Budo and become the best debater of his generation in Parliament, today’s boy in the same area is forced to learn under the sun, at a ‘learning Centre’, where the teacher-to-pupil ratio is 1:200, while in town it may be 1:50 or even 1:25. Yet the poor souls sit the same exam like their peers in town. They face the same completion for ‘equal’ opportunities. This is not the best way to create “one country”.

1/4). CONTRASTS: The kids at Lohana Academy, Kololo and those under the mango tree in Luwero or in Pallisa or at a “Leaning Centre” at Lachekocot {Achwa, Atanga Division} will sit the same PLE exams with/like those at Budo Junior, at Kaboja Junior, at Greenhill (Kibuli), a Kabale preparatory school (where Amin used to take his kids), Greenhill Academy (Kibuli), Lohana Academy (Kololo), and with those in a ‘mobile class in Kotido, etc

As a mater of fact, those under  mango tree may be better of, if the location is permanent. In Kangole (in Karamoja), the naked kids’ class follows the heard.

In Pader, 20 schools gather(ed) at one school near the district headquarters (to the north of Kwon Kich junction) and all the P5 classes for example, have one teacher shouting, with no megaphone. The teacher-to-pupil ratio here is 1-to-200 (national non-UPE average: 1:50 and in some Kampala schools: 1:25-30). How many pupils, having fled their homes are able to pick anything and later sit the same exam as the town kids?

2/4). Note: In the North of Uganda, under the insurgency, schools in an area, ranging from say 5-30 schools, gather/gathered at one ‘secure’ location, in most cases, a ‘hosting’ school, then constitute what is called a “LEARNING CENTRE”. All classes form a mega-class, with e.g. a P1 class is formed from 10 P1 classes from the whole area. As expected, these poor souls cannot be accommodated under one roof, so, the teachers take turns in shouting to them, in the school playground. At such ‘learning centres’ like Keyo C.O.U “host’ primary school (Pabo area), is /was always a spectacle to see children putting on10 different uniforms (by fashion and colour), running around, oblivious of their fate (these are lucky because at the Kwon Kich learning centre, 50% of the pupils running around had no uniforms and in some cases, were in shorts or in shirts only).

3/4). Dilemma: These poor souls are/would still be waiting for the same exam from UNEB headquarters at Ntinda in Kampala, as would be the spoilt kids at Kabale preparatory or Rock primary at Tororo and would/will both place their first choice as SMACK (St. Mary’s Kisubi)- imagine!!. Check the odds here.  The disadvantaged kid is unaware of its fate. The id is happy to sing when the president ‘flies’ by There are many contrasts here of course: The difference here of course is that the exams for Kwon Kich ‘learning centre’ would be delivered by an Mi-24  Hind gun-ship and those for Greenville by special courier. The Greenhill teacher will be an examiner while the Keyo leaning teacher will never know how examiners are selected. The Keyo pupil has never heard of or ‘seen’ electricity let alone, a computer. While the pastime of a Greenhill pupil is computer games, the pass-time of a Keyo learning centre pupil is bird-hunting with a rubber-catapult. The list of contrasts is endless yet, we say we are lining in “One Uganda” with equal opportunities. NO WAY!!

4/4). CONCLUSION: Watch out!! The gap is widening at a ‘SUPERSONIC’ speed (as Idi Amin would have put it). The days when a boy like Daudi Ochieng (later MP) (or even an Otunu) could come from Acholiland to King’s College Budo, or when one boy  Frank Kalimuzo (later Prof.) could come from Kisoro and end as a teacher at King’s College, Buddo are long gone. Uganda is no longer one and is much less a land of ‘equal’ opportunity than it was in the past. This situation is so because it meets and satisfies the aims and goals of the current crop of politicians. “Divide and Rule” is not a Machiavellian joke. it is a reality in our Uganda of today.

So, it is not fair to talk of “one Uganda” when we are busy working hard to divide our young ones and disadvantage the majority of them, from the cradle, from the start. Yet, the national wealth is generated from the efforts and resources of All Ugandans equally. Even the so called UPE money is used as a ‘bribe’ for local politics.