The NRM ‘Genocide Letter’ was Forged and i think Dr.Otunu is Responsible 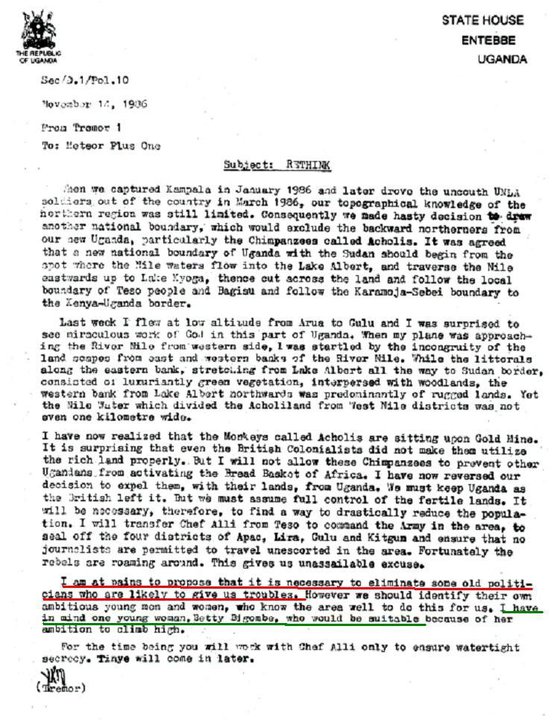 Dear Ugandans,
I Just want to make a few observations on the Olara Otunnu letter above that has been making the rounds here, apart from exciting Olara Otunnu into calling a press conference in Kampala to declare that he had made some important discovery regarding YK Museveni’s plan to eliminate the population of Acholi.

One most prominent point that gives away Otunnu & Co is their statement on Chefe Ali, and I quote: “I will transfer Chef Ali from Teso to command the Army in the area to seal off the four districts of Apac, Lira, Gulu and Kitgum….”. That statement summarises the ambush that always awaits many one-track mind forgers like the authors of this letter, namely, attempting to be retrospective but missing out key historical details. Throughout the 1980s to 1991, Chefe Ali was in charge of the Fort Portal based 7th Division (after a short stint as Kololo-based 11 Bn Commander in 1986). In the mind of the authors of the letter, just because in 1995 Chefe Ali moved to Gulu from Teso, that means he had been in Teso ever since the Pope was an altar boy. What this simply means is that the letter could not have been written between 1986 and 1991 because at the time, Chefe Ali was not in Teso.

The second point to observe is the opposite of the first point where they disregarded key historical points. They have attempted to “overcreate” the past. They have imagined that because there were no computers yet in 1986, they would look more authentic by using a manual typewriter. They have forgotten that most key government offices even by the fall of Obote II were using electric (mainly IBM) typewriters, not the portable Olympia Monica S which they seem to have used to type their forgery. They learnt a wrong lesson from the forgers of the DP document on Kayiira who used the Arial font launched in 1991 to forge a document dated 1987. Those are the brains of the country’s oldest parties!

Thirdly, and very important, I want to refer you back to the top secret letter that AM Obote Obote circulated ahead of the 1980 elections and note the close parallels not just in tone but also in the style of phrasing. I have pasted both of them below. Look at the similarity between the underlined sentences. In Otunnu’s forgery, the author states (red underline): “I am at pains to propose that it is necessary to eliminate some old politicians who are likely to give us troubles.” ; while the Obote 1980 elections strategy stated: “I am at pains to propose if necessary the leaders of other parties should be eliminated.” Look also at the bits underlined in green on the appointment of Kikira and Bigombe: Otunnu forgery: “I have in mind one young woman,Betty Bigombe, who would be suitable….” ; Obote 1908 strategy : I have in mind our old friend Kikira who would be suitable….” . Of course that coincidence in phraseology is not accidental. The same fascists that authored the Obote strategy of 1980 are the authors of the forgery of 30 years later.

Fourth, the codenames used in the forgery are also typical of the millenerian/mystical lexicon that has been in employment by Lakwenaist/Konyist strategists: “Meteor”, “Tremor”……very much in line with “Holy Spirit…”, “Lord’s….”; or Kony’s units, “Stockree Brigade”, “Altar Control Brigade”, “Gilva Brigade”, “Trinkle Brigade” and all such.

Sadly for the country, all these gentlemen are intellectuals who want to take charge of the lives of 32 million souls. They are among our very best, the country’s elite! Olara Otunnu who made the announcement of discovering that “genocide plan” is addressed as “Dr”, so is Ochan Otim. Just see how animated Otunnu looked as he addressed the press upon “discovering” Museveni’s “genocide plan”. Just look at him. One could easily speculate that his own enemies within the UPC have laid a trap for him by causing him to make such a fool of himself. They know he is sufficiently desperate to clutch at any nonsense.

of course the signature on the letter is not YK Museveni’s. No remote resemblance even.On the point of the quasimystical/non-rational/occult/other-worldly language in the forgery…”Tremor and “Meteor”, as I have said, that lexicon falls neatly into the known style of Lakwenaism/Konyism as shown.
So, it is not really difficult to identify the minds behind some of that nonsense.

‹ Older Post Why has Museveni’s birth place issue resurfaced?
› Newer Post What will Uganda do about the Nile water agreement after southern Sudan votes to secede?