Dr.Muhumuza’s Defence of Mutebile is absurd 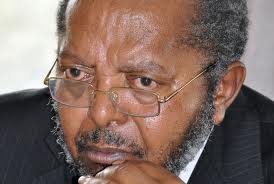 In the week that the Muteebile saga reached its peak here, next door in Kenya, we celebrated the lives of two prominent nationalist Men of Men: Njenga Karume and John Michuki. These need no introduction, save for the uninitiated, who I advise to seek out Karume’s book, Beyond Expectations. The passing of of these two luminaries, only served to inspire and reinforce the ‘Tuinuwane’ spirit, which was Karume’s philosophy, whose baton he passed onto three generations below him. The world in Kenya did not stop. On the contrary, everybody was fired and charged to add to what these two great men had done in their lives.

That Ugandan ‘experts’ are warning of dire consequences if Muteebile goes, is not only defeatist, but a clear demonstration of intellectual dishonesty, one key tragedy besieging this country. Dr Muhumuza’s argument is the most absurd. It is a loser on two fronts: one, advancing western speculative capital practices and policies as the panacea to Uganda’ s economic woes. In case he missed it, Dr Muhumuza will find Dr Mahathir Muhammad’s treatise on the fallacy of euro-centric arrogance in global economic and financial matters, very edifying. It was published about 3 weeks ago in The New Vision. Muteebile has been doing nothing at the Central Bank,but creating an artificially-controlled ‘economic stability’, a prescription from the Breton Woods Twins. And it works in their favour, not ours.

The second front where Dr Muhumuza loses it is about the ‘strong personality’ of Muteebile. This itself is another fallacy, since what is needed is professionalism, expertise and a clear national vision, not so much personality in the narrow psychological sense. Moreover, by bending to political pressure and embedded interests, even when he had constitutional protection, Muteebile glaringly stripped himself naked, showing all and sundry, that he can be compromised: what strong personality is this, even if we were to dwell on this variable? Muteebile betrayed the Mukiga in him, even after swearing to his peers at Kampala Club, that he would rather go home, than implement strange directives: but what have we seen? Trillions squandered on parade jets, billions( perhaps trillions) drawn for election campaigns,unexplained currency printing, capital flight( the actual cause of the dollar crisis late last year), and here we are, with ‘experts’ talking of one man’s invincibility???

It boils down to the intellectual dishonesty alluded to above. On three occasions at least, I have listened to Dr Muhumuza advancing Prof. Ha Joon Chang’s theory of ‘kicking away the ladder’, which explains why the western world is prescribing to us economic policies that they themselves never used on their path to industrialisation and the current dominance of the world. Chang aptly argues that the West, having reached the top, are now kicking away the ladder they used to climb, so that nobody uses the same ladder to reach where they are. That Dr Muhumuza knows this, yet advances the opposite is the tragedy of this country: the intelligentsia( in the larger sense of the word), knowing the truth and speaking( or keeping quiet) from their stomachs. This is treason by commission and/or omission. Dr Ssewanyana chooses the latter. Knowing what keeps EPRC going, she decides to play safe, not to ‘comment on matters political’. Of course she very well knows who Muteebile represents and their influence on her source of buttered bread: EPRC.

No man is invicible. No single man has a single vision. This line of argument is very poisonous, leading to the mentality of ..only him can manage the army…, a very terrible danger to the institutions, individuals and national destiny. Even in basic management, you are the worst manager if you believe that your office cannot run in your absence. A visionary leader, at whatever level, creates systems and structures that will see continuity after his departure. On a day-to-day operations basis, it saves you the hassle, since you achieve through your lieutenants.

The world existed billions of years before each one of us was born and it will continue to exist ad infinitum, after we are dead. A friend in our team puts it better: …’not even to my wife, the world will stop briefly for her for the first few minutes of my last breath…and very soon, she will be gauging who is the most suitable replacement’….!!!