At Kampala’s Mandela National Stadium this morning, 25 Fulham programmes and magazines were presented to the Cranes’ Captain, Andy Mwesigwa, for distribution to the Ugandan squad. A low res photo of Kevin O’Connor making the presentation to Andy is attached. 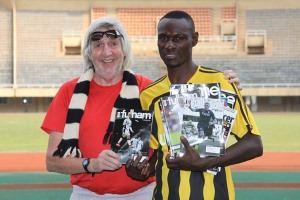 O’Connor, an athletics coach and Fulham supporter, said: “These magazines have been airmailed to Uganda by Fulham supporters in order to benefit Ugandan footballers. This is the second such presentation, and has been made possible with the assistance of National Football Coach, Bobby Williamson.”

“For me,” O’Connor continued, “today is a rather sentimental occasion. The photo shows me wearing a scarf (in Fulham’s black and white colours) that was knitted by my mother around 50 years ago, not long after my Dad had taken me to see my first match at Fulham’s Craven Cottage in November 1959. What with last Saturday’s 1-1 World Cup Qualifier draw against Senegal, and this coming Saturday’s African Cup of Nation’s Qualifier against Congo Brazzaville, this is a huge week for Ugandan football, and I do hope the magazines provide a little encouragement to the Cranes.”