Uganda’s broadcast regulatory body, the Uganda Communications Commission (UCC), has banned radios from airing a new song by renowned local artist Ssentamu Kyagulanyi (a.k.a Bobi Wine), pending investigations into claims that it is critical of the Kampala Capital City Authority’s (KCCA) Executive Director, Jennifer Musisi.
·The song “Tugambire ku Jennifer”, translated to mean “please talk to Jennifer on our behalf” was released earlier this month by Wine, the self-proclaimed “Ghetto president.” The translated chorus says, “tell Jennifer on our behalf to reduce her harshness, because the town is ours.”

The song discusses Kampala’s problems, ranging from increased murders and robberies to the eviction of vendors off Kampala’s streets. The song also allegedly points out that Jennifer’s ruthlessness is worsening the lives of poor city dwellers.
Article 29 1(a) of the Constitution of the Republic of Uganda, 1995 states that “everyone shall have the right to freedom of speech and expression which shall include freedom of the press and other media.”
In addition, the regional charters and international conventions that the Ugandan government has signed provide for this right. Everyone shall have the right to freedom of expression; such a right shall include the freedom to seek, receive and impart information and ideas of all kinds, regardless of frontiers, either orally, in writing or in print, in the form of art, or through any other media of their choice.

The Executive Director of the UCC, Godfrey Mutabazi, could not name a particular individual who complained about the song. However, he told the Human Rights Network for Journalists-Uganda (HRNJ-Uganda) that they had received complaints about the intentions of the song. “Several people complained to the commission that the song was abusive, so we can’t allow the airwaves to be used to insult others. The song was not banned, but we have instructed airwaves not to play the song until our investigations are complete, so that we can pronounce ourselves on it. We got the song from our data bank, and we are investigating it,” said Mutabazi. 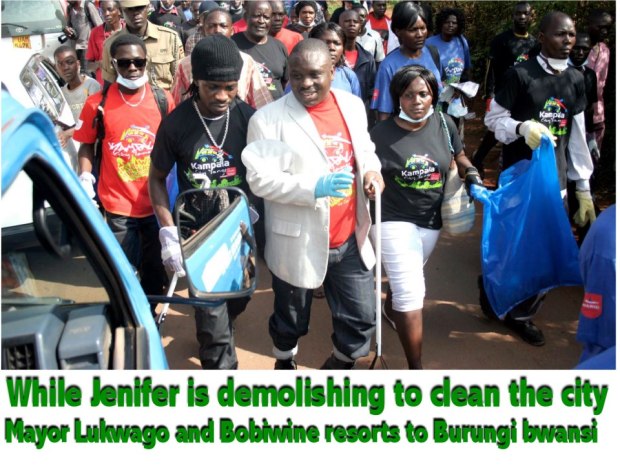 Mutabazi, however, could not tell how long the investigations would take before the commission can pronounce itself on the song. In 2009, the UCC arbitrarily and excessively closed down five private radio stations and also banned open air radio talk shows, which were providing platforms to citizens to check those in power. All of them are back on air and the last one was re-opened in late 2010. Nevertheless, none of the media managers or journalists were taken to court to answer for the alleged flouting of broadcasting regulations.

Wine told HRNJ-Uganda that the song was not an attack on any person, but his right to freedom of expression as a stakeholder in the capital. He refuted claims that it was directed at Jennifer Musisi.
Wine also said that the UCC should not be used to serve individual interests. “Let me advise the commission to remember that they are mandated to serve all the people and not a person. Let it listen to what the people are trying to communicate instead of intimidating their messenger. Listen to the voice of the people and understand instead of misunderstand; communicate, don’t miscommunicate!”

Asked whether the airwave ban on the song was communicated to Wine, Mutabazi said that as a commission, they only deal with broadcasters and not producers, so they did not need to do so at the time. Wine said he was set to launch the song next month in October, although it was still not clear whether Musisi would allow holding the music concert in the city. However, he defended his song by saying, “Jennifer does not mean Jennifer Musisi the Executive Director of KCCA.”

“The commission should accord the artist a fair hearing since investigations are ongoing. [It should] avoid misusing its powers to curtail his right to freedom of expression,” said HRNJ-Uganda’s National Coordinator, Wokulira Ssebaggala.

PM Mbabazi and Minister Rugunda must quit govt. They have been caught big time. Folks, what Bank Of Uganda(BOU) has done is commendable given the people involved. However, it is going to cost tax payers and donors a lot of money.Now here is the big question” did the ministers DELIBERATELY create a run on the bank.YKM has no choice but to dismiss his PM and Minister Rugunda. Friendship should not blur public policy.

The opposition MPs should stand up in the House and demand for the immediate resignation of the PM and Minister Rugunda.Even the editorial pages should do so.I doubt whether deposit insurance is that generous in Uganda. The customers may be out of luck for most of their savings.

Folks, diversify risk. You ignore it at your great peril.I am actually surprised by the stupidity displayed by PM Mbabazi, minister Rugunda and other shareholders. Why? Some of them may have even played a role in dismantling Greenland bank.

Granted the late haji Sulaiman Kiggundu (RIP) made blatant mistakes which cost him and the Muslim community dearly, but the Bakiiga elite-phew-seemed ignorant or may be deluded that since some of them had presidential ambitions-precisely-they could do anything and get away with it. So what did they do? They went around collecting funds from Bakiiga not just in Uganda but in the Diaspora to set up that Bank.

The problem was that the PM Mbabazi and some of the shareholders are crooks, thieves, kabisa and have now taken down the savings of hundreds if not thousands of Bakiiga who put all their eggs in one basket. Too bad.

Which raises the big question: why was it that it was the deputy bank Governor who finally pulled the plug? Put differently did Governor Mutebile let ethnic interests crowd his judgment? That is the question the media in Uganda should follow. Why did it take so long for BOU to move after some shareholders had complained? Listen to Mr Rukikaaire the former Chairman that they-shareholders I guess sans the Arabs-had raised capital. FYI, the bank was seriously undercapitalized but the Governor, ok, BOU looked the other way. Why?

The problem is much deeper and it may take a judicial Commission of inquiry to get to the bottom of it. And who is the BOU director in charge of financial supervision. is she still that lady who was supposed to be retired but is still in the job?

Again, the media in Uganda can get the full names and ask her some questions.Then the other shocking story. Why did BOU decide to hand the bank immediately to Crane bank? The normal procedure would have been for BOU to appoint receivers to move and ran the bank to ensure an orderly liquidation of the bank.

As things stand it is total confusion. For instance, we don’t know whose interests have been given top priority. Why did justice Kavuma listen to Nzei when it is now the interests of customers that take precedence? The last people on the list are shareholders who may walk away empty handed after clients, creditors and EVEN URA have been paid. So why did the judge entertain the interests of the last party?

And why it is the case that the press in Uganda is not digging deeper to unleash this very costly move. Like I said it is going to cost donors and taxpayers a lot to clear the mess.

Yes BOU may have been motivated to hand the bank to Crane bank to avoid a crisis in the banking sector but was it the right thing? Did BOU try to cover up for the thieving cabal high up in NRM politics?

Well Governor Mutebile has some explaining to do. He slept on the job as the Bakiiga mafia schemed to rip off unsuspecting Bakiiga. Why would they want them poor? So they can dominate them even more. Phew!

Folks, like I said before look at the composition of the board. Mr Rukikaire whose son is married to PM Mbabazi’s daughter is the chairman! Eeh . That is an issue. How did BOU let related individuals dominate the board? How could a board dominated by related persons make sound decisions? What is the law about related person and companies in Uganda? Who were the auditors of the now infamous bank? This is very important because the auditors should have known and protested about the presence of related person.

Well here is a tip for those suing PM Mbabazi and the bank. They should sue them along with their external auditors and of course BOU/AG.Yes for too long Ugandans have slept on their rights and paid heavily.

Bottom line: DIVERSIFY, DIVERSIFY, And DIVERSIFY. First it was the late Kiggundu who took down billions of savings by Muslims. Now PM Mbabazi, Minister Rugunda and others sons and daughters of Kigezi who have taken down the savings of so many hard working Bakiiga who trusted hyenas with their sweat. Pole.

Let us be honest PM Mbabazi is not liked by many powerful people within NRM. Yet for some reason he does not seem to be alert to the dangers surrounding him.YKM can sack him and Uganda will hardly feel it. Like I have been saying PM has no votes since he has been apparently using force to rig elections.

Actually Ugandans will drink themselves silly if YKM were to fire him. There is no other minister who is hated by Ugandans like the PM. Why? First he ate bush money and took off for Sweden. Then he comes back and is made PM. excuse me.

The Combo of IGP Kayihura and the CID director is working. The crooks in Uganda cannot take things for granted. Ms. Akullo is going after them and gong after them hard and it seems methodically. BTW, who is the immediate former Director of CID? He slept on the job and I hope he was snot promoted.

I bet you that super crook from Bushenyi is going to face the music very soon. His days running around and stealing public funds are numbered. I mean Haji Bassajabalaba. Crook number one.

I think Generel Tinye aka Sejusa is onto something. He may be hitting at the same PM for all the woes in Uganda. What is lacking so far is the equivalent of a Kenya’s Mwenje in parliament. It was Mwenje who went hard at then VP Dr Karanja in bunge. He was fired shortly. What we don’t know is General Sejjusa’s motive. What is it? Is he creating anxiety to save PM Mbabazi and his cabal? Why did he write that letter now when the PM seems to be in political jeopardy? What is General Sejjusa’s relationship with the PM? Or did he write that letter to hit at Ms. Jennifer Musisi and KCCA? Too many unknowns.

But General Sejjusa shakes things up. He cannot be ignored for sure. So stay tuned.