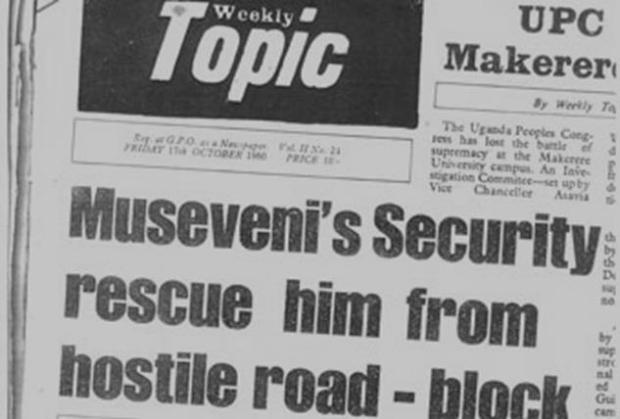 The Vice Chairman of the Military Commission Mr. Yoweri Museveni, who is also interim Chairman of the Uganda Patriotic Movement, was rescued from a road-block at Kireka near Kampala on Saturday after being held there for nearly four hours. The rescue was effected by Museveni’s own security personnel who acted after receiving information that he was being held there on the orders of some ‘Mukubwa’ at Nile Mansions.

Information reaching Weekly Topic Investigation Desk indicates that as Museveni was driving towards Ki­reka at about 6.30 p.m. he was overtaken by a car driven by an army officer who is understood to have issued orders at the Kireka Road block that Museveni should be detained there until further orders were received from Nile Mansions.

On arriving at the road block Museveni introduced himself and was told by the soldiers at the road block that they had instructions from ‘Our Mukubwa’ to de­tain him there until further instructions. The Vice Chair­man of the Military Commi­ssion – the ruling body in the country – patiently remained at the road block, together with his wife and five-year-old son for four hours. Meanwhile his two escorts had been disarmed.

At one stage there was disagreement between the soldiers manning the road block; some saying that there was no legitimate reason to hold Museveni there and others maintaining that they were under strict order to do so.
Somehow, nobody knows exactly how, soldiers respo­nsible for Museveni’s personal security learnt that he was being detained at Kireka and mobilised a contingent that rushed to the scene. Accord­ing to eyewitnesses, the Vice Chairman’s security perso­nnel arrived at Kireka in an atmosphere of grave tension and only a timely interve­ntion by Museveni prevented what could have been a bloody incident. He was immediately rushed home.

Whatever explanation for the incident one might care to offer, the political significance of the Kireka affair has not escaped the critical analysis of political observers. This is particularly so be­cause it came in the immediate aftermath of a week of concerted personal attacks and tau­nts against Museveni and the UPM by the UPC leadership.

It is, for example, a matter for easy recollection that a few days before, UPC’s Obote had challenged Museveni’s position as Vice Chairman of the Military Commission in a speech that was broadcast live by the National Radio. And the UPC organ, The People, published an article under a crude headline screaming:’Museveni is bogus’.

Political observers believe that the UPC are spoiling for an immediate showdown with the UPM, and that the week of taunts and snubs directed against the UPM boss was intended to provoke Museveni and the UPM leadership into ‘making a first move’, as one observer put it. According to this theory, the UPC leadership is stalking for an opportunity to ‘solve’what they commonly refer to as ‘the Museveni problem’, once (and) for all.

In another recent incident, gunmen attacked and fired at the car of Dr. Ruhakana Rugunda, Deputy Minister of Health, at his home. Dr. Rugunda is a key member of the UPM National Executive Committee who is known to be a close confidant of Muse­veni.

It has also been learnt that the UPM Secretary for Mpigi District, Herman Mugoye, was abducted from his house at Kajansi by armed men in Uniform. Efforts by UPM officials traced him to a room in Nile Mansions where, it is understood, he was being urged to ‘co-operate’.

At a press conference in the course of the week, Democratic Party boss Paul Semogerere complained that DP suppoÂ­rters in various parts of the country are being subjected to intimidation and torture. These are the conditions under which the Uganda citizenry are proceeding towards the ‘fair and free’ elections on December 10. 1980.