M7’s son will salute any president in Uganda!

Patrick Kamara: Do you think General Muhozi would salute you if you won the 2021 elections?

Hon.Kyagulanyi: The difference between us is that you live in the past while I am working for the future where the military is subordinate to civilian authority

I suppose you know it; in the army there is a code of conduct that compels every member of the force to do what he/she is expected to do. A junior officer will respect the senior, and the simplest of such expectations is greeting, “saluting”. 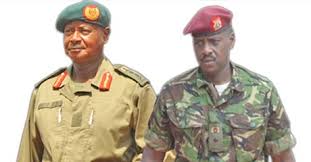 So if Gen. Muhoosi is a real soldier, he will obediently and professionally do what is expected of him; and he will also know the penalty for doing otherwise, insubordination which can have all sorts of interpretations, which will be very bad for him.

Interestingly enough, a junior who salutes his senior and his greeting not returned, can report the matter to a more senior officer and the erring officer will likely be reprimanded, but they are usually smart – they pretend not to have seen the small man, as they know the repercussions, and the effect on morale of the force.

Gen. Muhoosi will salute any president in Uganda, Kamara whether elected or usurps power, his salute from Gen. Muhoozi is guaranteed!