‘Sara Muteesi and Nora Amin were dismissed by Amin in 1975, in the presence of local and international journalists, in the gardens of State House Entebbe.’

‘According to a Radio Uganda broadcast, quoting a military spokesman, the 2 wives were dismised because “they were not coping with Amin’s supersonic speed of running the country and that they were involved in smuggling of textiles to Kenya”.

‘After living State House, Nora Amin was allocated a Custodian Board house on Buganda Road, opposite Buganda Road Court, next to King Kigeri of Rwanda who was in exile in Uganda.’

‘She died of natural cause in 1977. I can confirm to you this because I got it through a credible source, who was a close friend of Nora Amin.’

‘You may wish to check whether Taban Amin’s mother was also called Norah.’ 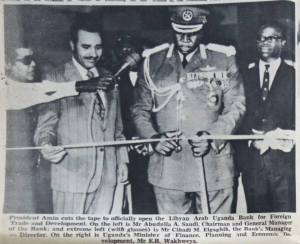 President Amin cuts the tape to officially open the Libyan Arab Uganda Bank for Foreign Trade and Developmet. On the left is Mr Abudulla A. Saudi, Chairman and General Manager of the Bank; and extreme left (with glasses) is Mr Clhadi M. Algaghih, the Bank’s Managing Director. On the right is Uganda’s Minister of Finance, Planning and Economic Development, Mr. E.B. Wakhweya.’
Uganda Argus, January 25th 1973

Amin’s son, Hussein Juruga also wrote on the UAH forum that his father never killed his step mum:”’Nora Amin succumbed to cancer at Mulago hospital where she had been unsuccessfully treated for days.Mama Nora is survived by two children. Issa and Fatuma Amin.But for those implicating Amin as many have authoritatively done in this forum, yet Mama Nora died painfully in the hospital while Mr. Kyemba had run away with 7m USD State funds for health equipment, is just heartless.I doubt this can be settled once and for all. Especially if it is for a simple post here in UAH. But for your “records”, Taban’s mother (RIP) is a totally different person.”